One machine for all cases

The right sensor for every measuring task

Perfectly integrated multi-sensor systems: With the proven multi-ram concept, an even wider range of multi-sensor systems can now be used without restriction and without time-consuming sensor changes. Each sensor has its own ram, the quills with non-active sensors are located in a parking position outside the measuring range. One of the first users of the new device concept is the measurement service company Messtronik GmbH in the Black Forest. Quote from the company's president Jörg Weißer: "As a measurement service provider, I receive a wide variety of workpieces. I use the multi-sensor systems on three independent sensor axes in combination with the rotary/tilt axis for measuring tasks whose solution was previously considered too complex or even impossible."The combined measuring ranges from 530 mm × 500 mm × 350 mm to 2130 mm × 1000 mm × 600 mm enable multi-sensor measurements even for larger workpieces.

All good things come in threes

The ScopeCheck® FB is probably the only coordinate measuring machine with three independent sensor axes for even greater flexibility. The machines allow fast measurements with a high level of operating comfort for three, or even four sensors with the Werth Laser Probe integrated in the Werth Zoom or the Chromatic Focus Zoom (patents). The family of machines combines the benefits of conventional optical, tactile and multi-sensor coordinate measuring machines.
The widely used combination of image processing and stylus is obtained, for example, with a rotary/tilt head for tactile measurements from all orientations on the first ram and the Werth Multisensor Systems with Werth Zoom, Werth Laser Probe and the also patented Werth Contour Probe on the second ram. The patented Werth Fiber Probe® 3D or the Chromatic Focus Line sensor can then be used on the third ram. Since the rotary/tilt head and the Werth Fiber Probe® 3D each require their own ram, such a combination by sensor change is not possible on conventional machines with a single ram.
Optical, tactile and tactile-optical sensors can be used without sensor change. Only one ram is positioned outside the measuring range and the required one is moved down. It is also possible to combine the system with more specialised sensors such as the Werth Interferometer Probe for measurements in small bores.
In this way, large and complex 3D workpieces as well as micro-structures can be measured. As an alternative to the rotary/tilt head, a slim stylus quill allows collision-free measurement of geometries lying deep in the workpiece. If initially only a purely tactile machine is required, retrofitting to a multi-sensor coordinate measuring machine is also possible at a later date without restricting the stylus's range of applications. 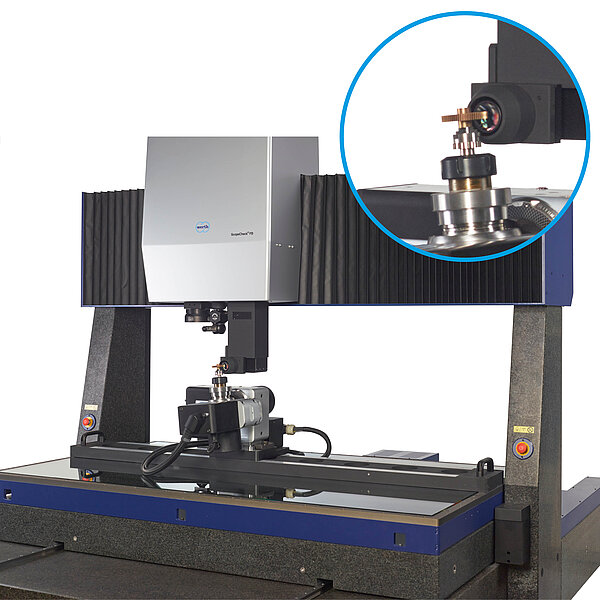 When using multiple sensors, a rotary/tilt axis for the workpiece makes almost all geometry elements accessible to each sensor from different sides and allows them to be measured in the same workpiece coordinate system. The user can mount the rotary/tilt axis on the machine in any orientation. The axis is then automatically calibrated and the run-out errors corrected. When using a rotary/tilt axis, three independent sensor axes are particularly advantageous due to the increased risk of collision.
In the conﬁguration with rotary/tilt axis and Chromatic Focus Line sensor CFL, the ScopeCheck® FB enables, for example, the measurement of large gears with a diameter of 2 m. The line sensor CFL is one of the sensors that have a preferred direction in which they function optimally. Thus, for gears with oblique teeth, the CFL line should be parallel to the teeth. In the machine shown below, the angled CFL lens points in the Y direction and the CFL line is perpendicular. For gear measurement, the tilt axis is mounted in a YZ plane. The rotary axis is tilted from the vertical by the gear angle, e.g. 20°, and then rotated 360°. For example, to measure the spiral flutes of drills, the rotary axis can also be tilted in the X direction and rotated around the X axis. 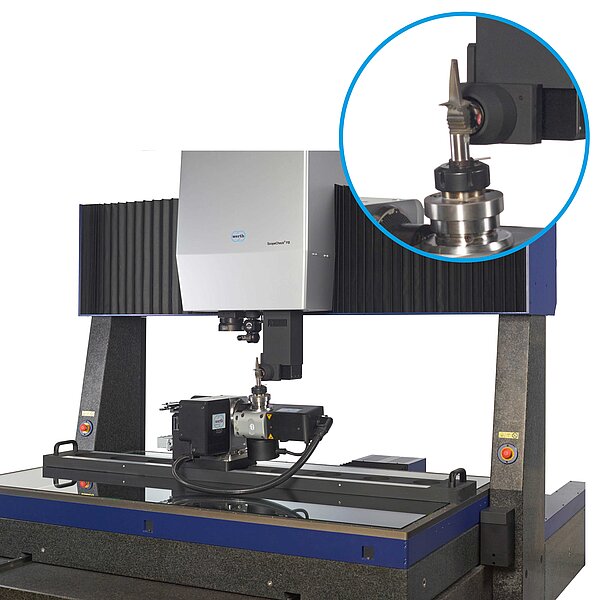 To make the root geometry of turbine blades more accessible, the rotary axis is tilted by about 20°

However, measurement from all orientations is not possible with this configuration, the top surface cannot be measured. If the tilt axis is mounted in the XZ plane and the rotary axis is tilted in the Y direction, the CFL line is located on the top surface of punching-bending or stamping dies and cutting inserts. In order to make the root geometry more accessible when measuring turbine blades, on the other hand, the rotary axis is tilted out of the perpendicular by approx. 20° and measured at the rotation angles 0° and 180°. The blade geometry can be measured in the vertical at the rotation angles 0°, 60°, 180° and 240°. 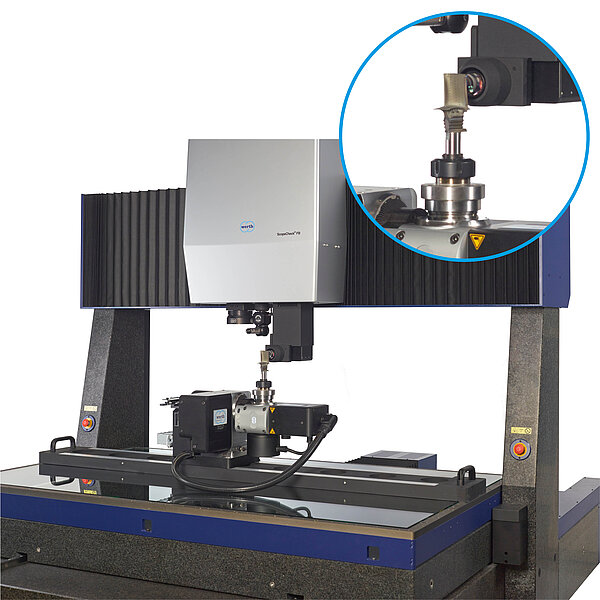 "The combination of the angled lens with the rotary/tilt axis offers the highest flexibility for the Chromatic Focus Line sensor," is Weißer's experience. With several swivel positions between Y and Z orientation, workpieces such as (hip) implants, spur gears, hydraulic pistons and plug connections including cover surfaces can finally be measured completely.